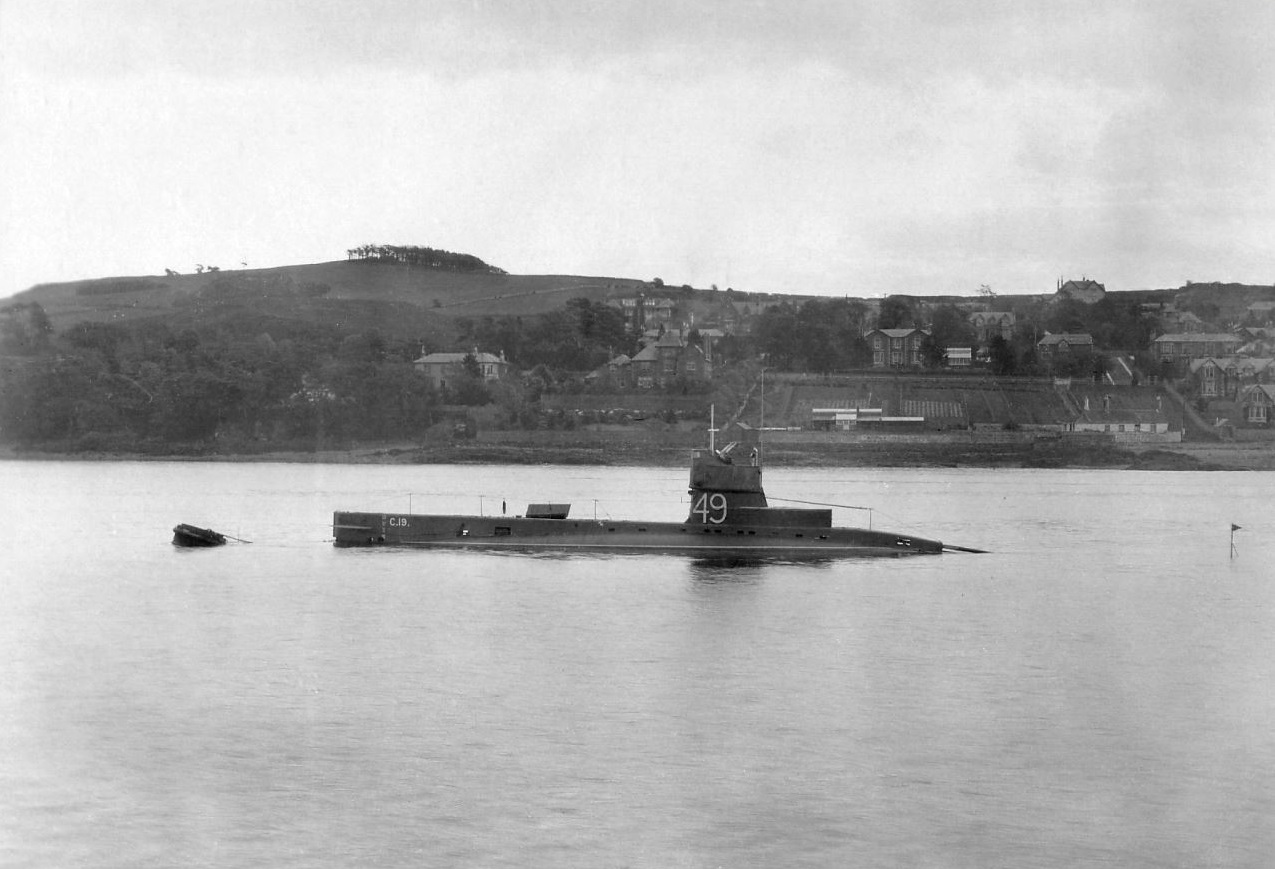 In 1908 the Admiralty began looking for a place on the east coast of Scotland to build a submarine base. The location would need to provide shelter to shipping but also give quick access to the North Sea. Dundee caught their eye. The mouth of the River Tay gave safe anchorage to shipping and easy access the North Sea. Dundee docks also had extensive marine repair and maintenance facilities.

To progress plans for a submarine base the Admiralty turned to the Harbour Trust for help. The Trust was happy to oblige and in November 1908 they set up a committee to assist the Admiralty. In early March 1909 negotiations began for establishing a submarine base. By the 20th May both parties agreed to a 5 year lease starting on the 1st of September 1909. Work to establish the submarine base got underway shortly after.

Signs that the naval base was nearly ready to receive submarines came on the 8th of November 1909. The Admiralty tug ‘Robust’ arrived in the Tay from the Sheerness Naval Dockyard. Its job was to lay the buoys and moorings for the repair ships and submarines that would be coming to Dundee.

At 2.00pm on Saturday the 27th November, the 7th Submarine Flotilla left Portsmouth for Dundee. The submarines sailed the 512 mile journey on the surface and endured heavy, rough seas. After 56 hours the flotilla finally arrived in Dundee at 10.00pm on Monday 29th November. The submarines entered the submarine base in King William IV Dock for the first time on St Andrew’s Day, 1909.

On the 28th of July 1914 Austria-Hungary declared war on Serbia. The response from the Admiralty was to order its naval fleets to go to their war bases. The war base for the 7th Submarine Flotilla based at Dundee was Rosyth. In the early hours of the 28th, 6 submarines left the base for the mouth of the Tay. At 2.30am the next morning the submarines and HMS Vulcan left for the Firth of Forth.

It’s at this point that many people believe the naval base at Dundee closed. Not so!

The original 5 year lease for Dundee Naval Base was due to expire at the end of August 1914. For operational reasons the Admiralty looked to extend the lease in May 1914. The initial proposal was for a further year starting from the 31st of August but this changed in early July. The original lease was now extended by 2 years and 1 month and would expire on the 30th of September 1916. With the main flotilla of submarines now based elsewhere, was the Dundee base still needed? Come 1916, nothing appears in the minutes about renewing the lease for the submarine base. Nor does anything appear in the newspapers.

Why the lack of information?

An explanation for this could be Government censorship following the Battle of Jutland. (31 May 1916 – 01 June 1916). The Navy claimed victory but at a terrible cost. The battle was brutal with 14 ships sunk and over 6,000 sailors killed. Many ships that survived the battle were severely damaged and in need of urgent repair.

Many of the battle damaged ships went to Rosyth for repair. The base at this point wasn’t completely finished and had limitations on what it could do. It didn’t take long for the limitations to show and turn into a major problem. Rosyth highlighted a serious problem for the Royal Navy. When it came to repairing battle damaged ships they didn’t have the resources to get the job done quickly. During a war this was a tactical blunder.

To close the base at Dundee now and lose its repair and maintenance capability would be stupid. We eventually found a letter which explained that an agreement was made to extend the lease for a further year. It seems that Dundee was still needed.

The submarine base lease was up for negotiation again in August 1917. The attitude of the Harbour Trust was simple. If the Admiralty wanted to extend their lease all they had to do was pay £4100 per annum. But this sum was no longer agreeable to the Admiralty as they were looking to save money on their rent. (There was a war on after all!)

Upon advice from the Chief Valuer for Scotland the Admiralty offered only £3100. With this new valuation figure the Admiralty gave the Harbour Trust an ultimatum. £3100 was all they would pay and that was final. The Harbour Trust wasn’t happy. Despite it being a big drop in income, they renewed the lease for another 3 years beginning 1st of October 1917.

On 20th of November 1919 a comment was made in a meeting between a government official and the Harbour Engineer. The Harbour Trust requested clarification in writing to confirm the Government’s intentions. The letter arrived dated the 31st of January 1920.

The letter was clear. “The Government will not require the accommodation at the Dundee Harbour for Naval purposes after January, 1920”. The Harbour Trust’s reply was also clear. The Admiralty had signed a 3 year lease from the 1st of October 1917 and they “must adhere to their bargain”.

The Admiralty fulfilled their obligations. In a letter dated the 28th of May 1920 they gave the required notice to end their lease on the 30th September 1920. So ends the tale of Dundee’s first submarine base – the first in Scotland.