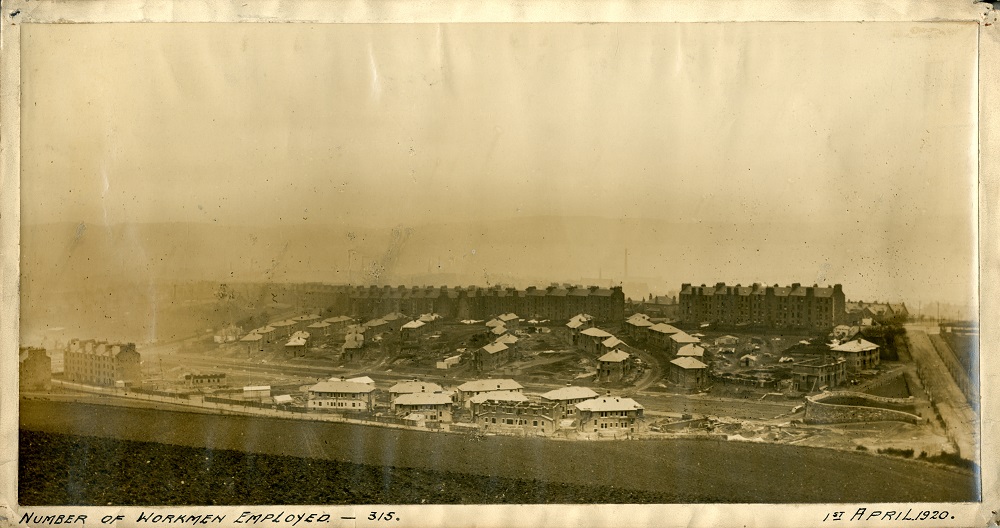 We take a look at what happened in the Logie project 100 years ago this month.

By the beginning of April there are 315 men on site and painting work has begun inside 2 of the blocks – things are getting close to people moving in. On 22nd April the Council advertise in the Courier for house painters on what they describe as a ‘long job’. Things are moving along nicely. Mr Reid, the Housing committee convener asks permission to start planning the opening ceremony for the end of May. One committee member jokes that there better be “champagne and oysters”. “We’ll see”, says Mr Reid.

By 6th April, 120 homes were pretty much ready to be moved into (aside from paint) and Reid confirms that tenants have been allocated to all 120. Another 130 would be ready within 2-3 months, just about hitting the target of 250 ready by Whitsunday – 23rd May.

But before anyone can move in, the rents need to be approved by the Board of Health. Someone is dispatched to Edinburgh on 21st April to press the Board to make a decision. We’ll have to wait until next month to find out if they agree.

Meanwhile on the 20th April the Lord Mayor of Liverpool, in town for the launch of the Machaon at the Caledon Shipyards, visited the scheme on a tour of the City. He praised the general development of the city and said that in order to push industrial development, housing needs would need to be met. He also complimented the “fine situation” of the Logie Houses.

However the size of the houses continues to have been an issue. When discussing the new houses at Hospital Park, it is clearly stated that the total floor space of the homes will be made bigger. Living Rooms will go up from 200 square feet at Logie to 220 in Hospital Park, big bedrooms from 150 to 160 and small bedrooms from 120 to 130. The much maligned stairs and lobbies will increase from 3 ft wide to 3 ft 6 inches. In previous blogs I have mentioned how the narrowness of the entrances was mocked in the press, and it seems there were serious reservations about the size of the corridors and rooms. A humorous cartoon and poem in the Courier from 2nd April (on the theme of April Fools Day the previous day) continued by poking fun at the width of the stairs. The longer poem refers to other things happening at the Council at the time.

I also found an advert selling mahogany furniture, which clearly stated that the furniture was at a size that was suitable for Logie houses.