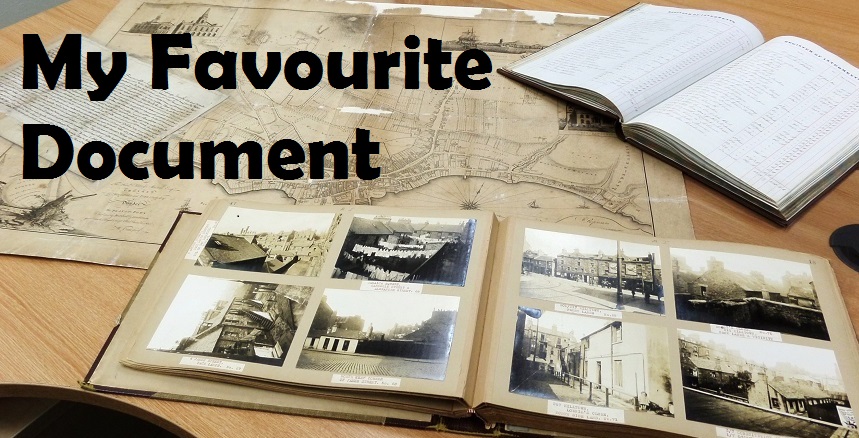 This month researcher, volunteer, author and member of the FDCA, Gillian Molloy tells us about her favourite document: The Act of Council legally deprived Alexander Wedderburn of his office of Town Clerk because of his support of the Jacobite cause (Ref: TC/CC1/151).

The document details the eveidence given against Alexander Wedderburn before the newly appointed Provost and Council on 9th August 1716. Wedderburn refused to attend the meeting, staying at his home in Blackness. The Council found the case proved and “the said Alexander Wedderburn culpable and after voting have deposed and hereby depose him from Clerk of Dundie and Barony of Hiulltown thereof”.

It’s my favourite document because it gives a glimpse of Dundee in 1715 and the affect of the rebellion. Like Wedderburn some members of the council had been happy to greet James Stuart and his cause. Throughout Scotland many gave their lives or liberty, some their money, for the cause. When the rebellion failed those who had supported the Jacobite cause tried to escape to France or to fade into the background and hope to escape government retribution.

Alexander Wedderburn (1675-1744) was the eldest son of James Wedderburn, clerk of Dundee and Elizabeth Davidson. On 1st March 1685 his father managed to get the council to give Alexander “a gift of the clerkship to be drawn out in his favour” (DCB, 136). In January 1696 he succeed his father as clerk of Dundee and served in that office for over twenty years. On 24th August 1714 he was compelled, as clerk, to take the oaths of allegiance, assurance and adjuration to King George of Hanover, but it is clear that his principles were in favour of the Jacobite cause.

The Town Council Minutes show that on Friday 29th July 1715 a meeting was called by Bailie Robertson. He had been informed of “a sudden invasion to be made by the Pretender with a foreign force from parts beyond sea”. The meeting agreed to certain measures regarding the security of the town but these had to be changed on the following Monday after some of the guards had asked to be relieved of their offices “as their business was calling them from the town”. This was agreed to and other men chosen for the guard. Bailie Robertson then appointed “this day to be solemnized as His Majesty’s accession to the Throne “by displaying the colours going to the Cross firing the guns with bone fixes and illuminations as usual all which the Council unanimously approved”. After these minutes the book is totally blank and there are no further minutes of the council until late 1716 (Town Council Minute Book 1704 – 1715 Vol. VIII and Vol. VIIIA 1716-1742).

After the Rebellion had been quashed those who had supported the Jacobite cause found it prudent to disappear for a time. On 26th April 1716 Provost John Scrimgeour and any members of the old council who could be found were required to meet and to call other councillors as they saw fit to form a Committee to enquire into information given in by the town’s inhabitants against Alexander Wedderburn and his conduct “during the late unnatural rebellion” (DTC, Vol. 8A 1716-1742).

In April 1716 by order of the King, Archibald Duke of Douglas, Lord-lieutenant of Angus and Constable of the Burgh of Dundee arranged for the election of a new council. The result was approved and confirmed by the King in Council on 6th July 1716. The new Magistrates and Council lost no time in making an investigation into the circumstances of the late Rebellion, and the connection which the officials of the burgh had therewith.

On 9th August 1716 the Provost, Baillies, Dean of Guild, Treasurer and other members of the Council convened within the Council house to consider information given to them by some inhabitants. William Gibb, a maltman in Dundee, gave witness that “Alexander Wedderburn went to the Cross of Dundie with the Rebels at one or other of their treasonable solemnities” and also went and met “the Pretender when coming to Dundie and came in with him and his sword drawn in his hand”. William Gibb stated that Wedderburn had entered the Council house accompanied by the Earls of Mar and Marshall and several rebellious gentlemen where they were given a treat and burgess tickets. He had seen Alexander Wedderburn acting as Clerk and bring in the burgess tickets. Mr Gibb said that “the said noblemen and gentlemen had non when they went in the Council house but had tickets in their hats when they came out”. Other witnesses also gave statements and the committee found it also proved that after the election in the year 1715, when Alexander Watson was Provost, the said Alexander Wedderburn several times went into the Council house, with the members of the then Council, and there sat and acted as Clerk to the Council. They also found it proved that during the time of the Rebellion the said Alexander Wedderburn did collect the Excise.

The result of the above evidence was that Alexander Wedderburn was, by Decree of Declarator by the Court of Session, legally deprived of his office of Town Clerk, and declaring that George Duncan was lawfully appointed thereto.