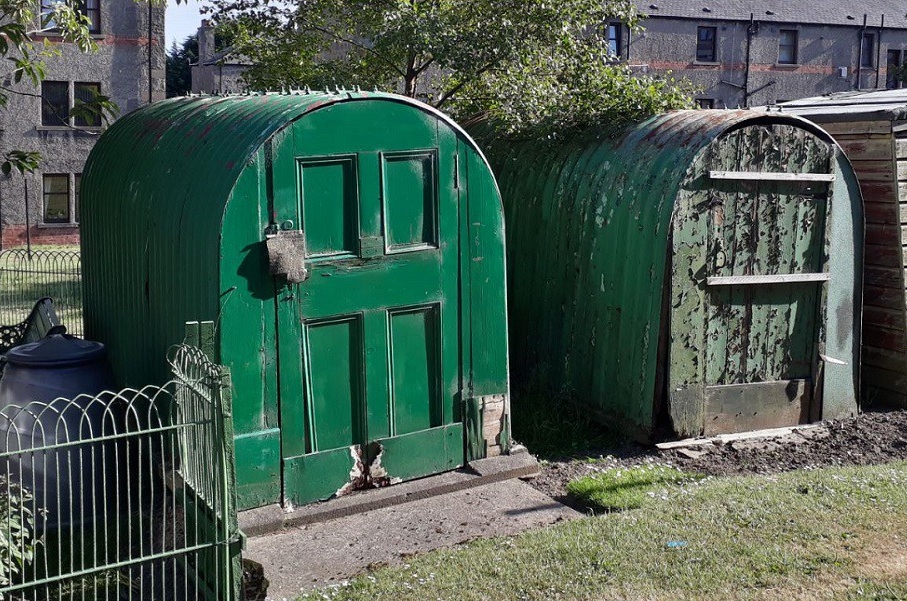 They’ve been part of Dundee’s urban landscape for nearly 80 years now. To the untrained eye they’re odd shaped, rather scruffy looking metal garden sheds. In a past life though, they had a very different use. They are in fact Anderson air raid shelters left over from World War 2.

The story of the Anderson shelter, named after the minister in charge of air raid preparations, begins in November 1938. With war clouds gathering over Europe, hostilities with Germany was becoming ever more likely. Evidence of what Britain could expect came from Spain’s Civil War of 1937. The bombing of civilians in Guernica and Durango by German and Italian planes was a deliberate act of terror. The purpose behind these bombings was to demoralise people and break their will to fight. In a war with Germany, Britain could expect similar treatment. 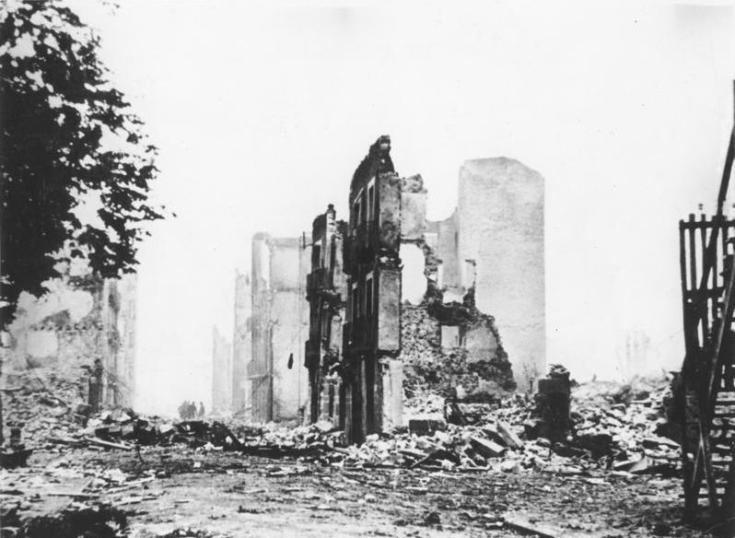 Britain urgently needed an air raid shelter that was cheap and easy to build but also suitable for back gardens across the country. On the 10th November 1938 the Home Secretary tasked William Paterson with designing an air raid shelter to fit this criteria. Within a week he had a design ready. Testing by the Institution of Civil Engineers found that the shelters were tough and up to the job. They approved the design and full scale mass production started. By the 28th February 1939 homes in Islington, London were the first to receive an Anderson shelter. Dundonians would have to wait until August 1939 before they could get their hands on one. Their arrival was well timed as just a few weeks later Britain declared war on Germany.

The Anderson shelter had its limits though. For those living in tenements – where there was no garden space – an Anderson shelter was no use. That left the majority of Dundonians without access to air raid shelters. A solution to the problem came in the form of surface and basement shelters and trenches. Morrison shelters were also used.

Building enough air raid shelters was a huge task for the Council. They needed the full co-operation of the city’s people but that didn’t always happen. We have found examples of this in the Town Clerk’s files. In September 1940, the City Engineer identified the basement at 26 Seagate for use as an air raid shelter. It would give shelter to people from an adjoining tenement as they had nowhere to go during an air raid. Despite the urgent need for a shelter, the owner was “unwilling to allow his premises to be used for this purpose”. After much delay, the basement was finally requisitioned on the 28th of January 1941.

On the 17th June 1940 a letter from the Civil Defence Office in Edinburgh to the Town Clerk laid bare the situation in Dundee. Some 90,000 people were in need of air raid shelter accommodation but less than 5% of shelters were ready. A shortage of materials and manpower was behind the lack of progress.

The proprietor of the Post Office in King Street complained to the City Engineer in a letter dated the 21st November 1940. He wrote how “sadly disappointed” he was at the “decision you have taken to erect a surface shelter” in the street. He felt there was “a great many of these abominations in this neighbourhood” which were a “waste of money”. The tone of his letter is surprising and lacks empathy. He would have been aware of the air raid just 17 days earlier that killed 2 people at 19 Rosefield Street.

On the 8th of May 1945, Germany surrendered. So there was no longer any need for air raid shelters. The Council closed all public and communal air raid shelters on Tuesday the 5th of June 1945. Demolition would follow over the next few years. For a nominal payment of £1 (£35 in today’s money) householders were able to buy their Anderson shelter.

There were 2031 shelters in back greens and open spaces in Dundee – most of these were probably Anderson shelters. Just how many are left is unknown. They say old soldiers never die, they simply fade away. Dundee’s Anderson shelters might go the same way.

Do you have an Anderson shelter in your Garden? Why not tell us about it in the comments section below.

One thought on “The Last Survivors – Dundee’s Air Raid Shelters”