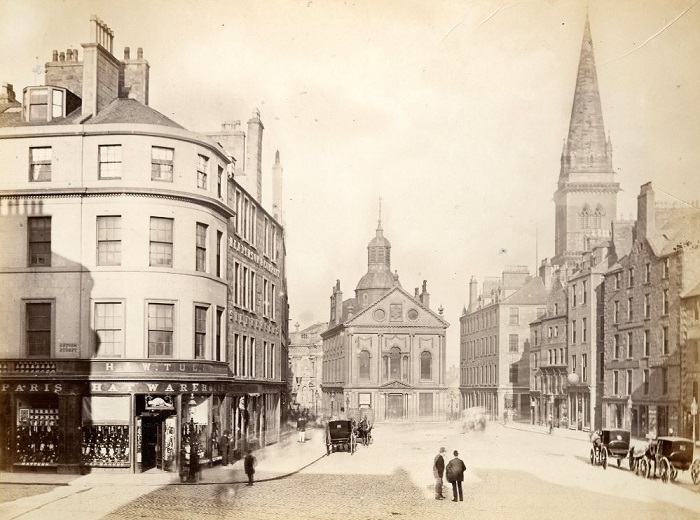 People tend to look at old photographs of the 19th century through rose tinted glasses. A nostalgic view develops and they exclaim – “Those were the good old days!” But were they?

Let’s think about this. Life in the good old days was smelly and dirty. For a start there were horses everywhere leaving deposits behind them. The smell of horse manure was one of many unpleasant smells to fill your nostrils. Factories spewed out smoke and all sorts of chemicals – Dundee’s Jute factories had a particular whiff about them.

What about the people? With no fancy bathrooms back then they ponged too. The only bathroom feature you had was an outside toilet you shared with the neighbours. The privy wasn’t a place where you wanted to spend time and read the newspaper. Your room with a view was damp, dirty and a disgusting place to sit and think.

Unknown to the users, the foul water from their privies was seeping through the ground and contaminating their drinking wells. Disease and death followed. Cholera struck Dundee in 1832, 1849, 1853 and 1866. There were also outbreaks of typhus in 1837 and 1847.

In late 1862 an investigation into the sanitary condition of Dundee took place. The reports made for dismal reading. Slum housing and the lack of effective sanitation left the city in a disgusting mess. It was a picture of squalor which offended the senses. Dundee’s public toilets were described as “intolerably offensive” and in need of serious improvement.

Access to toilets in public areas is something we take it for granted nowadays. Turn the clock back to the 1860s, though, and it was a completely different story – especially for women. Public toilet provision for men was poor but for women it was virtually non-existent.

In a report to the Sanitation Committee on the 6th October 1868, Dundee had 36 urinals, 17 of which had no running water. Female facilities didn’t feature in the report at all. The reason for such inequality in public toilet provision stems from Victorian cultural thinking. The Victorians thought of society as being split into ‘separate spheres’. The domestic sphere was the domain of women as society regarded it a woman’s duty to look after the home and family. Any matters outside the home, such as politics and business, were the public sphere which was the reserve of men. Tied to domestic duties, there was no need for women to journey far from home and require the use of a public toilet.

Indeed it was inconceivable and horrifying to the middle classes that a respectable woman would degrade herself to use such a facility.

The emphasis in the 1890s when creating public toilets was still biased towards men. We see this from the drawings by the City Engineer of public conveniences. The drawings confirm that the public sphere thinking of the Victorians persisted and continued into the Edwardian era and beyond.

Until 1894, responsibility for public toilets lay with the Police Commissioners, who also controlled sewers, paving and lighting in the city. The first discussion of public lavatories for women that we can find took place in June 1879. A sub-committee was asked to report on the issue – but we can’t find any such report. The issue was raised again in August 1887 – again with no result. On 12th June 1894 the Sanitary Committee received a letter from the Dundee and District Mill and Factory Operatives Union, which was mainly made up of women, requested that the Commissioners make public lavatories available. For a third time the matter was remitted to a sub committee.

Later that year, following the Dundee Corporation Act 1894, the powers of the Police Commissioners were transferred to the Town Council. They decided not to convert part of the Westport toilets for females and started to look for alternative venues. On 10th October 1896, 17 Nethergate was announced as the chosen site. But there was a problem. There was already a tenant. Lindsay & Low used the premises as part of a shop. Although they were served notice in 1898 they were given a year’s notice. In October 1899 they were given until Whitsunday 1900 (June 4th). Then at the last minute the Council decided to reverse the Sanitary Committee’s decision. So a new location was needed.

In May 1900 a property on St Clements Lane was chosen. The tenants, Winter & Duncan, agreed to move to Castle Street. The new female toilets cost £100 to fit and were free to use. They were later extended and a charge introduced. So from the start of discussions in 1893 it took over 7 years to build a female toilets in the city centre – that’s a heck of a time to sit with your legs crossed!

But this was by no means an end to the inequality. A report on creating more free toilets in 1906 revealed there were 152 public toilets in Dundee – only 10 of which were for women in the St Clements facilities. Extra female lavatories were built at the West Port. They were closed in 1920 and part of the existing male toilets (see plans above) were converted for women to use.

But problems arose again in the 1930s. On 3rd March 1930 the St Clements Lane lavatories were demolished as part of the City Square development. So the only ladies’ toilets were a couple of poorly ventilated stalls in the underground conveniences at the West Port. On 3rd Oct 1932 the Council received a letter from the Dundee Women’s Citizen Association complaining about the lack of facilities.

Eventually a ‘Ladies Retiring Room and Left Luggage’ facility was built at the junction of Shore Terrace and Castle Street in the Caird Hall building in 1934.